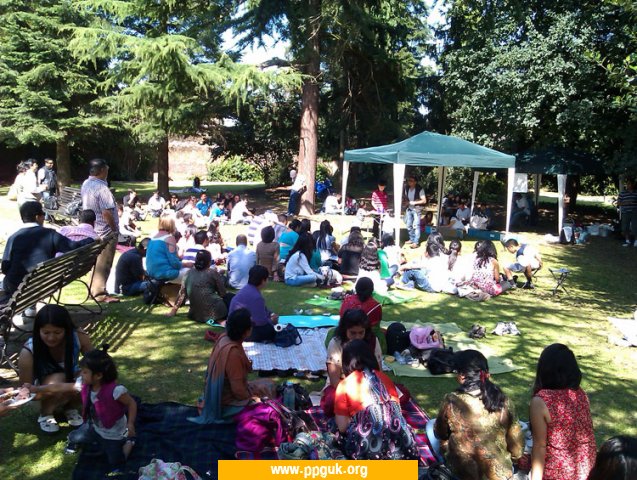 – A  Report By Lasata Tuladhar

There was a large turnout for the picnic as approximately 130 people attended. The event was held at Gunnersbury Park, near Acton Town, formerly an estate which belonged to the Rothschild Family.

The day began with a starter of Samay Bajee, consisting of baji( flaked rice), palu(ginger stick), Baraan(Peanuts), eggs, bhuti(black eyed beans), Mana chhoyela, Bhutan, aaloo and banana  . All the food in the meal was prepared and sponsored by members of Pasa Puchah Guthi. It proved to be an excellent meal to start the rest of the day.

In addition there was entertainment provided after the meal. There were various games for people to enjoy, not only the Frisbees and kites but also there was a revival of many traditional Newa games like Gha Kasa and Dhun Kasa.

For the children there was a special ‘spoon race’ to play. During this game, the children had to hold a plastic spoon in their mouth and keep the peas inside from falling out. Winners were rewarded with chocolates or a month’s membership to the game Bin Weevils. The games were followed by the Bingo and the Raffle. Both were hugely popular and there were many prizes for the winners.

To end the day, a traditional bhwoye(newa feast)  was served. The dessert of sweet yoghurt with fruit and Lalmohan following the bhwoye was another mention worthy yummy addition that was again sponsored by the guthi members.

Mha Puja, the next even to be organised by PPGUK was also announced to be on Sunday, 30 October 2011 at Hammersmith Town Hall.

Overall, the annual Picnic was an enjoyable day for the people who attended and a great accomplishment for the organisers.