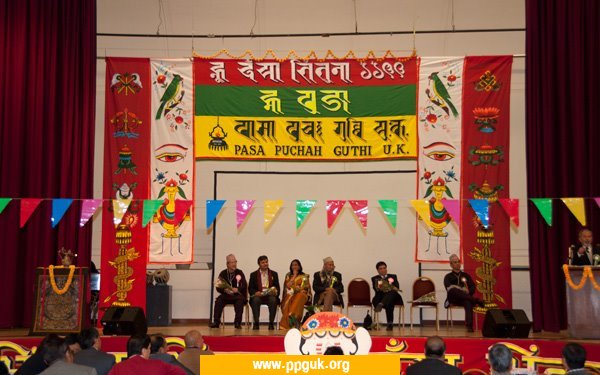 PRESS RELEASE
London – Nov 01, 2011
The First World Newah Convention concluded successfully on the 31st of October with a series of different programs and the London Declaration. The three day long convention, which started on 29th October, was jointly organized by World Newah Organization (WNO) and Pasa Puchah Guthi UK (PPGUK) in London. Newah delegates from the home country Nepal and other parts of the world participated in the event.

The second session started with a discussion on the WNO constitution prepared by the WNO constitutional committee. The question-answer session was chaired by Prof. Manik Lal Shrestha and Dr Bal Gopal Shrestha. During this session, the ad hoc committee was dissolved by Mr Daya Ratna Shakya and the participants unanimously selected Dr Bal Gopal Shrestha as the first president of the WNO. The first day was concluded with a dinner at Euston where participants had a chance to interact informally.

On the third day, participants of the convention were taken to London on a study tour followed by a group dinner. After the conclusion of the convention, on the fourth day evening, all participants gathered for a large dinner at Slough. Here the much-awaited London Declaration was read to the guests by the former chairperson of the WNO ad hoc committee, Mr Daya Ratna Shakya. The participants welcomed the five-point declaration and expressed their own views. The WNO newsletter was also launched by the chief guest Dr Satya Mohan Joshi at the dinner.