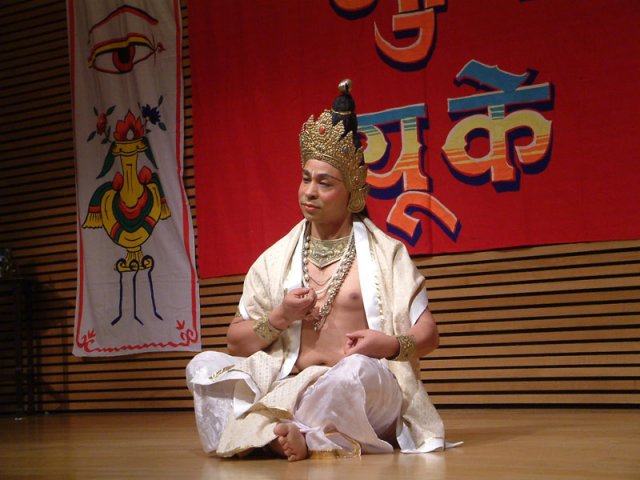 Pasa Puchah Guthi UK and Matina Quarterly have jointly organised Prajjwal Vajracharyaâ€™s Nepalese unique and classical â€˜Charya danceâ€™ in National Portrait Gallery, Trafalgar Square, London in the aid of Nritya Mandal Vihar in Portland USA as well as Newah Chhen in the UK.Â  Under Rik Mastersonâ€™s live classical singing Prajwal Vajracharya and Helen Appell had performed dances like Vajrasattwa, Aryatara, Chakrasamvara, Singhamukha, Mahakala, Vajra Barahi. In the programme Dr David Gellner Professor at Oxford University had highlighted about Newah Buddhism and introduced the artists as well as each of the dances they performed. At the end of the programme Mr Vajracharya had thanked the audience and organisers, and he had answered the questions raised by the audience.

Chief Guest of the programme Mr Khimananda Bhushal, Representative from the Nepalese Embassy had honoured the artists with flowers and certificates of appreciation. Ms Erina Pradhan had conducted the programme and the Acting President of PPGUK Krishna Chakhun had delivered the vote of thanks.

From the age of eight years Prajwal has been dedicated to the classical dances and has been performing and teaching the Nepalese classical dances in different countries. Under his training Helen Appell has been practising and performing various Charya dance since last five years. Before that she had been living as a Buddhist monk for fourteen years. Similarly Rik Masterson has been practising Hindustani Raga for last 30 years, and has been singing classical devotional songs for Charya dance since last one and half year with the team. They have been constructing Nritya Mandal Vihara in Portland Oregon and raising funds for the Vihara.

The artists returned back to USA on Monday the 4th May 2009.