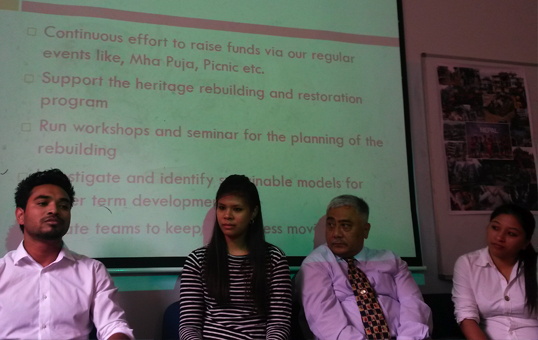 Pasa Puchah Guthi UK (PPGUK) held its Annual General Meeting (AGM) on Sunday 12th
July, at ABI College, Acton. The meeting was attended by PPGUK founding member Shashi
Manandhar, past President Dr. Sachetan Tuladhar and general members of the Guthi.
Current President, Mr. Kapil Shrestha welcomed everybody and thanked every member of
his team for their hard work and support for the successful completion of activities
within the past year. He also stressed the importance of achieving a charity status for
PPGUK and how this would raise the profile of PPGUK during their Nepal Earthquake Relief work.
The AGM consisted of a presentation by Ms. Tribeni Gurung and Ms. Bebina Mali on firstly
the activities which have taken place up to date such as meeting with past and present
Executive Committee Members, Mha Puja 2104, and Guthi Seminar 2015 and secondly the
income and expenses of each activity.

Mr. Ojesh Singh presented the relief effort PPGUK have been involved with since the 7.9
magnitude earthquake hit Nepal on Saturday 25th April 2015. In summary, PPGUK have
now collected £12500 in cash and over 500kg of items such as clothes, food and
medication. Mr. Singh also stated it was necessary for PPGUK as well as the Nepali
communities to investigate and identify a sustainable model for the redevelopment of Nepal
in the long term.

Guthi member, Mrs. Ganga Kachipati expressed her sadness of the earthquake in Nepal
and shared her stories and experiences of collecting donations, medical supplies, food and
toiletries from Epsom and St Helier NHS Trust.

Additionally, the meeting also comprised of a short speech by Ms. Sophie Long, a recent
graduate from Brunel University, who is looking to fundraise for victims of Nepal’s
earthquake for two organisations: Prisoners Assistance and Kamala Foundation. Ms. Long
stated she was looking for fundraising ideas and ways the Nepali community could help her.

In regards to any other business, Ms. Gurung stated that a Joint Secretary position was
available within the Executive Committee and a proposal to bring in a new member had
been supported by the current Executive Committee. It was decided that Ms. Preetie
Kachipati would take up the responsibilities of the Joint Secretary position; Ms. Kachipati
has been an active member within the Guthi from a very young age and has committed to the
Guthi’s activities and values.

Within the meeting, guests were also served traditional Newah bhoye such as baji, alu-
chhwonye and chhoyela.