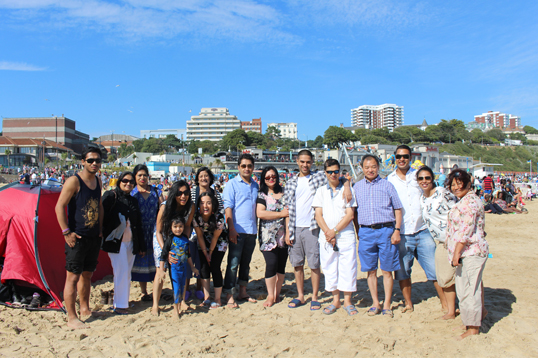 Pasa Puchah Guthi UK (PPGUK) held their annual picnic at Bournemouth Beach on
Sunday 2nd August 2015. This was the first time in PPGUK history, the Guthi held their
picnic outside of London.

A coach was hired to pick up guests from various locations in West London. During the
journey, sandwiches, banana and juice were served on the coach as breakfast and guests
also actively participated in fun filled games such as Bingo and Antakshari.

The fun was carried down the sea front where all enjoyed a variety of beach sports and
activities. A raffle was also drawn in which prizes included a luxury beauty treatment
with a bath and shower gift set; belly dancing experience for two and a 40 inch TV which
was sponsored by singer Yogeshwar Amatya.

As the end of the day approached, all guests reluctantly began leaving the beach and
making their way back to the coach. However, the day at the beach might have been over
but the fun did not stop. On the coach, guests enthusiastically engaged in a Quiz which
consisted of questions about London, Nepal, Newah Culture and General Knowledge.

The winner of the quiz was awarded a prize for Paintballing for ten, including lunch.
This year’s Annual Picnic has without a doubt been a huge success. The idea to host the
event on a beach was highly applauded by all guests who emphasised how much they
enjoyed themselves.