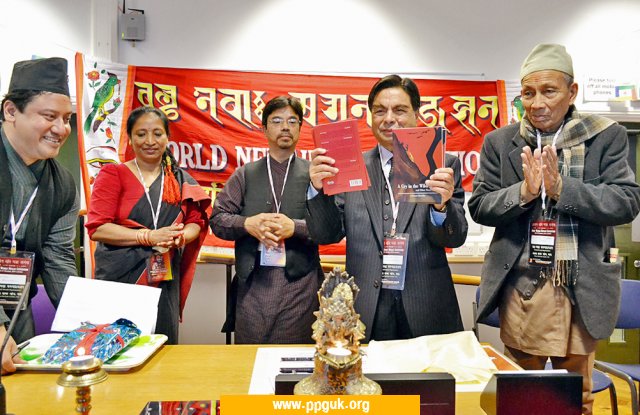 The IX Annual General Meeting of Pasa Puchah Guthi UK convened on Sunday the 6th of September at Abbey Estate Community Association Alperton, with visiting chief guest Dr Bal Gopal Shrestha from the Netherlands.Â  As this yearâ€™s AGM coincided with the auspicious Indrajatra festivities in Nepal, the meeting was held with a celebratory tune, accompanied by traditional gastronomical delicacies including Samay Baji.Â  The day was also used to commemorate the auspicious Birth Anniversary of laureate poet Siddhi Das Mahaju (1867-1930). He is recognised as one of the Pyanga Than (Four Pillars) of Nepal Bhasa, who began the literary renaissance in the late 1800â€™s.

The main event began with General Secretary Mr Rameshwor Shrestha presenting the annual report of PPGUK 2008-2009.Â  He highlighted the Guthiâ€™s achievements for the year and scope for improvements.Â  Vice President Mr Binod Shrestha spoke about the various sporting events PPGUK had organised and participated.Â  He touched upon how these activities have encouraged the younger members of our community to come together and engage with the Guthi.Â  Treasurer Mr Dhiraj Bade Shrestha then reviewed the checks and balances for the year with the 2008/2009 PPGUK fiscal statement.
In the AGM, the acting incumbent Mr Krishna Sharan Chakhun was unanimously elected by the executive committee and its members to position of President of PPGUK with immediate effect.Â  The executive committee also appointed Mr Rameshwor Shrestha and Mr Rajesh Tuladhar to PPGUKs Administrative sub-committee with Mr Pabitra Man Shakya leading the Cultural subcommittee with Mr Bipin Joshi and Mr Sabin Rajbhandari.Â  As recognition of the strides made in the sporting division, the executive committee has requested Binod Shrestha to continue the good work with Suresh Baidya and Sambhanda Pradhan in the Sports sub-committee.Â

The AGM has passed a motion to set up a membership sub-committee, with the task of collating the list of active members within the next 2 months.Â  This team will be entrusted to publicise and facilitate the membership base.

â€¢Â Â  Â Founder members will be automatically elected to the board of trustees.

â€¢Â Â  Â PPGUK division across the UK will have a proportional representation in the board of trustees.

Reflecting on the Newa Bhela, Mr Mahanta Shrestha explained the necessity and benefit from the congregation.

The AGM was concluded by newly appointed President of PPGUK Krishna Chakhun outlining his vision for the Guthi, and presented its objectives for the year 2009/2010.Â  He stressed on the urgency of registering PPGUK with the Charity Commission in the UK, along with the aspiration of organising the Newar rituals – Ihi, Bahra, Chudakarma and Kayata Puja.

Chief guest Dr Bal Gopal Shrestha, reminiscing the famous words of the late great poet Siddhi Das Mahaju – â€œBhasa Mwaasa Jaati Mwaaiâ€, echoed this aphorism that preservation of our Mother tongue is the sole basis of our Ethnic Identity with an insightful talk.Â  He furnished an in-depth analysis of the cultural cleansing that Nepal Bhasa has had to overcome in Nepal during the Shah and Rana Dynasty, and how we still face this battle for equality for our rich language even under a present day Republic Nepal.Â  He emphasised the importance of how we can start to play an active role in the conservation of Nepal Bhasa by taking the simple steps of practicing this at home with our family and principally our children.

The President, Mr Chakhun finally thanked all the members for their participation and officially closed the curtains on the IX PPGUK AGM.Â  Mr Pabitra Man Shakya provided entertainment with a sneak preview of songs from his upcoming album â€˜Dhairyaâ€™ to be released next month. Mr Rameshwor Shrestha, Mrs Junifa Shrestha, Mrs Rukmani Shrestha, Mrs Sushma Amatya, Mr Bipin Josh, Mr Laxman KC and Mrs Sabita Manandhar had kindly organised the food and refreshments for the event.