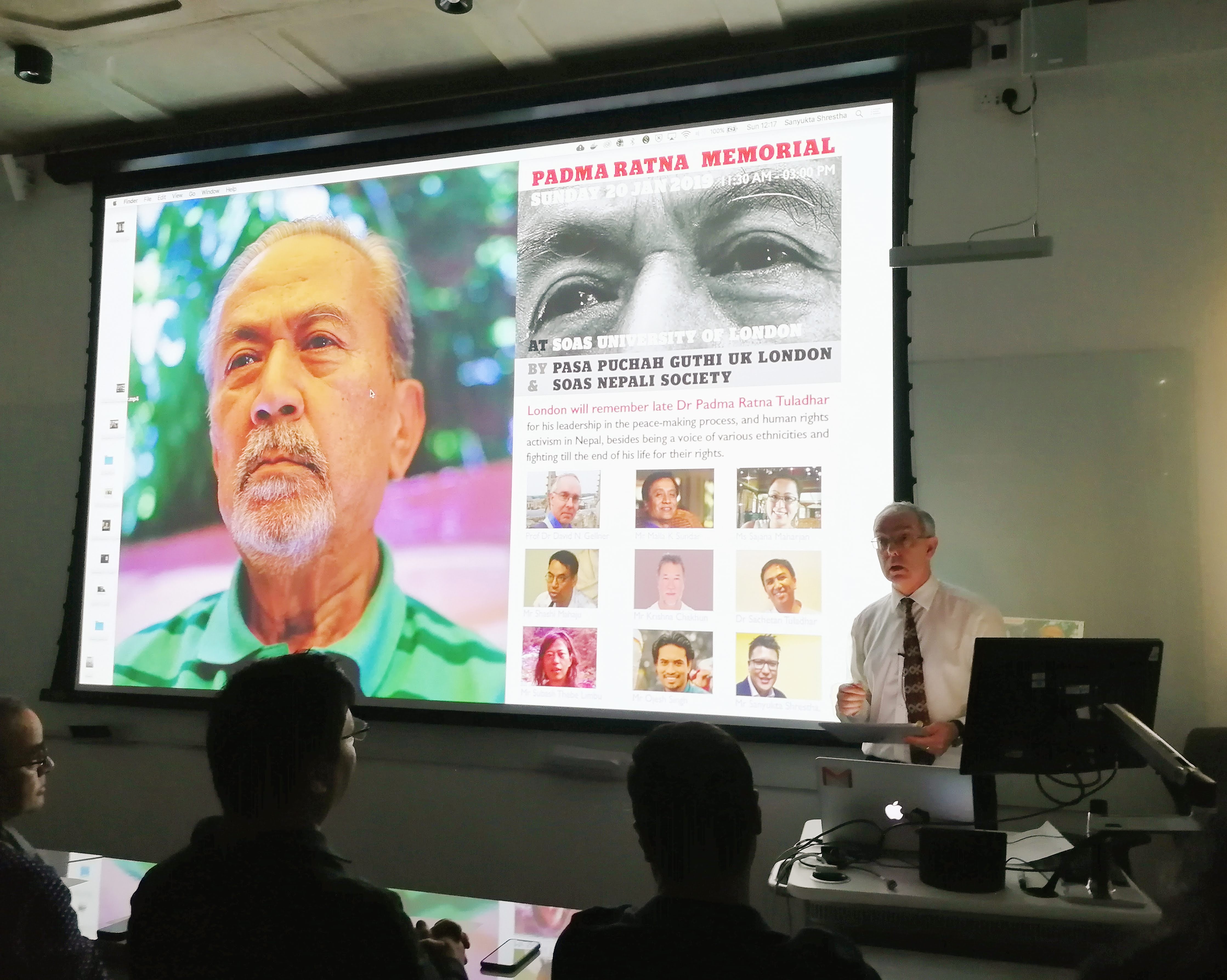 Pasa Puchah Guthi UK (PPGUK) London & SOAS Nepal Society jointly organised a memorial event to commemorate the life and contributions of late Dr Padma Ratna Tuladhar on Sunday 20th January 2019 at SOAS University, London. The event attended by 30 guests, including university students of various subjects related to social anthropology and politics of Nepal, was attended by representatives from the Embassy of Nepal in London.

Conducted by Sports Secretary Mr Sumeet Bajracharya, the event started with an introduction of all speakers by President of PPGUK London Mr Sanyukta Shrestha. Secretary to His Excellency the Ambassador, Mr Tejendra Regmi paid heartfelt tribute to late Mr Tuladhar and expressed that he looked forward to learning about Mr Tuladhar’s contributions to Nepal from the various presenters of the event who had researched about him.

First speaker of the event, Prof Dr David Gellner from Oxford University presented a character sketch of late Padma Ratna Tuladhar titled ‘Padma Ratna, the shy leader’. He shared his valuable experiences with late Mr Tuladhar from the last few decades and some excerpts from his interview from 1996. Second speaker Mr Malla K Sundar elaborated on Padma Ratna’s contributions as a political figure and his contributions to Nepalbhasha Movement. Through a video talk, his sharing of lifelong association with Padma Ratna was a valuable learning material for the audience.

Third speaker Ms Sajana Maharjan shared her valuable experience of working with Padma Ratna for more than 13 years in the field of human rights. She shared some of the details of Padma Ratna’s ideology within human rights activism and how he rose as a ‘mediator of mediators’ whilst Nepal went through a peace process after ten years of insurgency period. Fourth speaker, editor-in-chief of Matina Quarterly publication, Mr Shashi Mahaju highlighted on Padma Ratna’s contributions to Nepalbhasha literature. He elaborated on Padma Ratna’s upbringing which had special contribution to his inclination towards his mother tongue and preferences in filling the gaps in Nepalbhasha literature.

Fifth speaker of the event, former president of PPGUK and Vice-President of World Newah Organisation, Mr Krishna Chakkun highlighted on Padma Ratna’s contributions towards the worldwide networking of Newah community. He informed about the history behind formation of World Newah Organisation through an international convention in London in 2011, and Padma Ratna’s role in the historic achievement. After a short refreshment break, sixth speaker, former president of PPGUK London Dr Sachetan Tuladhar shared his valuable experiences with Padma Ratna Tuladhar as a family member. He revealed lesser known facts about Padma Ratna’s personality as a quiet yet humorous person at home.

Seventh speaker, London-based artist Mr Subash Thebe Limbu, presented his insightful talk titled ‘Language and Dissent’. He elaborated on Limbu community parted ways from its mother tongue on the rise of one-country one-language policy during King Mahendra’s regime, and how the contribution by prominent activists like Padma Ratna Tuladhar was instrumental in an attempt to improve the situation. Eighth Speaker, Vice President of PPGUK Central Coordination Committee Mr Ojesh Singh delivered his talk titled ‘Padma Ratna: A mentor, guardian and an unconventional friend’. He shared his valuable experiences with Padma Ratna since an early age, his learnings from the multi-dimensional personality and some interesting facts about Padma Ratna’s personal life and interests.

Ninth and last speaker, PPGUK London President Mr Sanyukta Shrestha presented his talk titled ‘Padma Ratna’s impact on Nepali youth & the Future of Newah Movement’. His talk elaborated on what made Padma Ratna who he was, the history of suppression in Nepal and its continued form at present. He explained how the face of Newah movement is changing and the youth is playing a major role in redefining it.