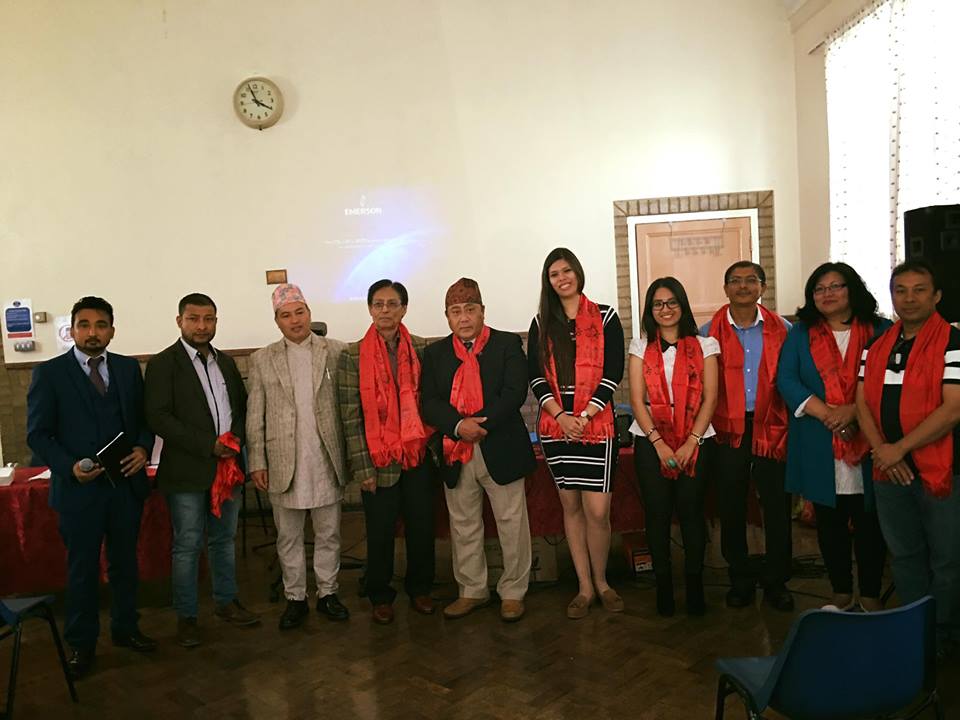 During the meeting, General Secretary of PPGUK, London Miss. Tribeni Gurung delivered a presentation on the events and activities of PPGUK, London held within the 2014-2016 term. This included the Mha Puja programmes, Seminars, Picnics and also the challenges faced by the Guthi during the devastating Nepal earthquakes of April 2015. Miss. Gurung also emphasised how the Guthi strives to attract the younger generation via the use of social media such as Instagram and Twitter. She also highlighted that in order for the Guthi to grow, it is important to network with people externally. Effectively this has created PPGUK into becoming a lot more diverse than in the past.

The biannual report and accounts of 2014-2016 was delivered by Treasurer, Ms. Bebina Mali. She explained and gave details of the Guthi’s income and expenses during this time.

Following on from this, Vice President of PPGUK, London, Mr. Ojesh Singh gave an account of the earthquake relief activities of the Guthi, elaborating on relief collection, distribution and recent activities. He mentioned that the earthquake relief team will be continuously raising funds to rebuild heritage sites around Kathmandu valley and the team is open for anyone to join. Furthermore, he also expressed that workshops and seminars will be organised around the topic of the earthquakes.

Mr. Singh also spoke of The Legend of Shankhadhar – which is Nepal’s first animated movie – and the target for the film was £6000. Members of the Guthi have contributed towards the production of the film, and Mr. Singh called on others who would like to contribute. Mr. Singh then announced his involvement in a research project focusing on Indrajatra which is being jointly conducted with Tribhuvan University, Nepal. The research paper will be written under Pasa Puchah Guthi UK.

The audience got a chance to participate in an interaction and discussion session with the Executive Committee to give feedback and ask questions about the Guthi’s events and activities.

This year’s AGM proved to be memorable as it was an opportunity to award those individuals who have contributed immensely to the Newah Community and Guthi. As such, PPGUK, London Vice President Ms. Menka Shrestha was awarded for her amazing dedication of 5 terms in the Guthi. She was presented an award by President Mr. Kapil Shrestha and thanked by the entire committee.

Likewise, Ms. Marilena Frisone was also presented an award for her commendable contribution within the Newah community. Ms. Frisone is currently running and teaching Nepalbhasha classes at SOAS University. She was awarded with the Rameshwor Guthi Sirpaa: and £350, which was presented by Ms. Rita Devi Singh. Although she was modest about the gradual success of her Nepalbhasha Classes at SOAS, the entire committee and audience praised her efforts to promote Newah culture. She accentuated in order for youngsters to be able to maintain what it taught in class, co-operation between the older generation and younger generation is vital. The youth needs to be exposed to the culture behind the language in order for them to have passion and willingness to learn. Ms. Frisone mentioned that she is aiming to create a small Nepalbhasha language book.

In his final words, Mr. Kapil Shrestha expressed that he is fortunate to have gone through certain moments in his life with members in the Guthi and thanked the audience for their undying support. He also expressed for the community to support each other during one’s hard times. Mr. Shrestha then dismissed the Executive Committee of 2014-2016 and the Election Commissioner, Mr. Kumar Shrestha and his Secretary, Mr. Sushil Prajapati unanimously elected the new Executive Committee of PPGUK, London for the new term.

Following is the newly elected Executive Committee of PPGUK, London for the term 2016-2018:

Lastly towards the end of the meeting, Mr. Sushil Prajapati, presented the new team of PPGUK, London with a Lakhey costume as a gift from PPG South East London, UK.